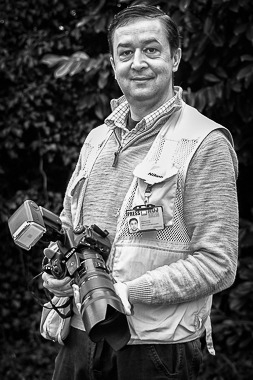 I began my career as a commercial photographer back in 1987 and by 1989 I was working in a major advertising studio in London under the late award-winning photographer, Rolf Cornell. From an early stage my work was published internationally for major blue-chip clients.

Following London, I went on to manage photo-labs and studios in other parts of the country, then I took a break from photography by moving to the Republic of Ireland where I took up writing. Following a few placements with small independent magazines including being the editor for one, I moved in to the theatrical world and took up the first of a couple of residencies as a playwright in Cork City. Between the two residencies I worked as the script assistant on the cult radio sitcom “Under The Goldiefish”

Around the turn of the century I moved into corporate video when I joined Television Production Partnership (TVPP) working with Emmy nominated foreign correspondent and producer for “Roger Cook Investigates” - David Bowen-Jones and RTS award winning (Watercolour Challenge – Best Daytime Programme), Rosie Bowen-Jones. Whilst with TVPP I became a producer and developed an extensive digital skill-set with Photoshop, 2D and 3D motion graphics, non-linear video editing and graphic design for both print and screen.

In 2006 I began to make the move to digital stills. The tools from the time weren’t anywhere near as sophisticated as today’s, but by 2008 I had migrated from wet process to the far cleaner and more comfortable world of digital. I opened my photographic business in 2009 and by 2012 had a stable of clients with work being published all over the world. For a while I worked for Newsquest on their titles in Oxford (Oxford Mail, Oxford Time, Witney Gazette and Banbury Cake et al) before going on as a freelance NUJ accredited photojournalist. My commercial work has always been the rock on which all other creative endeavours are built.

In 2016 I began a project that has since developed a life of its own; Still At Large. A true-crime podcast rebroadcasting appeals for information from Police in relation of unsolved British murders. I struggled with the ethics of this project extensively. The episodes treat the victims and their families with the utmost respect and wherever possible the minimum of graphic detail as the show is not to glorify violence or celebrate the killer but is an attempt to get at least one murderer off the streets of our country.

2019 marks the ten year anniversary of my marriage to my wife, Karen.